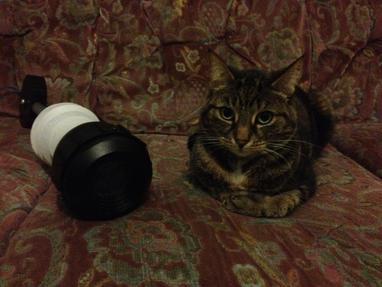 Name
The reason why Dalek Amber is called Amber is because it is named after my owners cat. Project Dalek Amber was set in motion after an event by Charity Dalek Squad back in 2010 under the name Sec. However the project was semi abandoned until another Charity Dalek Squad event in November 2011 which helped kickstart the project with the Dalek being renamed to Amber to make it more personal and special. Amber the cat was put to sleep sadly on Saturday 13th October 2018 after suffering from a tumour. This was one week after Dalek Amber was complete on Saturday 6th October 2018, and a week before the Dalek's first event on Saturday 20th October 2018. 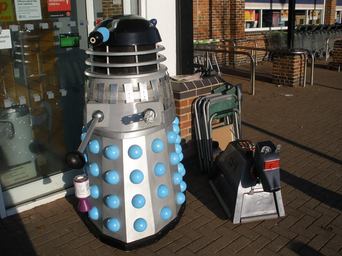 Dalek Elsie with K9
Dalek Elsie is Dalek Amber's older sister, she was built by Chris Kingbees in 2008, Elsie is one of the main reasons why Dalek Amber exists today. She uterlises the design of the 1967 story "Evil Of The Daleks" which starred Patrick Troughton as the Second Doctor.

Elsie was always going to be a charity worker, and her main charity was going to be Last Chance Animal Rescue, so she was given the name LC Dalek the initials of her primary charity, however this sounded like a DJ or rap artist, so LC was nicknamed Elsie and her nickname stuck.
Website: http://elsiethedalek.com Facebook: http://facebook.com/DalekElsie

Amber has a team of eight operators who trundle around for the entertainment at charity events and to also promote charity awareness of the three main charities she supports.